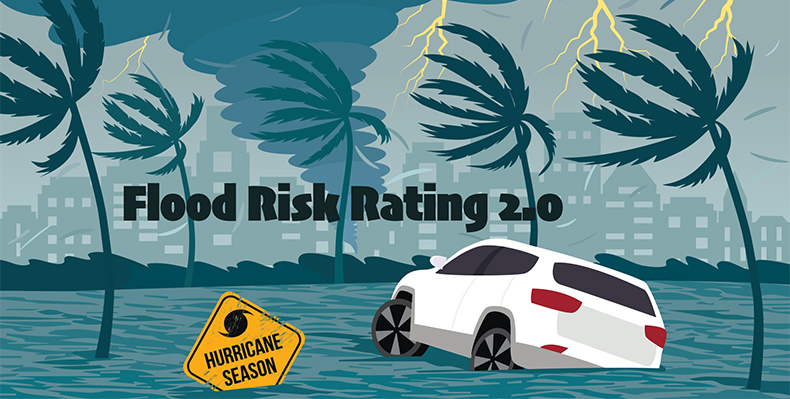 As mentioned in our May blog, on March 18, 2019 the Federal Emergency Management Agency (FEMA) announced the release of Risk Rating 2.0. The goal of this new view of flood insurance rating was to deliver insurance rates that, “people trust, value, and are less complex to navigate.”

The plan was to release the new rating methodology on October 1, 2020, but on November 7th FEMA announced they are delaying the release until October 1, 2021. FEMA advised that they needed to further analyze the proposed rating structure to “protect policyholders and minimize any unintentional negative effects of the transition.” It also allows the rating to be released for single family homes, multi-unit homes, and commercial properties at one time, instead of a phased approach.

Why Are Flood Rates Changing?

Currently flood rates are determined by a property’s flood zone and it’s elevation in relation to what FEMA considers the base flood. Although it sounds simple, when you start rating structures that have unique features or are in high velocity VE zones, you quickly see how tricky rating can be. FEMA believes that new technology and actuarial data will allow quick and accurate pricing of a property’s true flood risk, instead of seeing whether or not it sits in the 100-year flood plain.

Flood Risk Rating 2.0 will use new data to determine these rates, including the following:

FEMA hopes that by instituting the new rating methodology it will decrease dramatic rate increases property owners face during flood map changes. They also hope that it will lead to more people purchasing flood insurance, which allows the NFIP to spread the risk of flood insurance.

As Patty Templeton-Jones of Wright Flood said, “No longer will an A zone in a coastal state be the same as an A zone in say, Montana. Nor will an X zone near a body of water be the same as an X zone more inland.” Although much of the info behind Flood Risk Rating 2.0 is behind closed doors, this doesn’t sound great for Pinellas county. Pinellas county is a peninsula on a peninsula, and many parts of the county are under the base flood. We also have large amounts of property values around the barrier islands and bay, including our downtown area. The good thing for us is that FEMA will still impose legislative caps on rate increases.

As mentioned in our prior blog, Flood Risk Rating 2.0 will bring significant changes to flood insurance for Floridians. As we find out more information, we’ll be sure to release it via our social media, blog, and newsletter. If you have any questions about Flood Risk Rating 2.0, your current Flood insurance, or anything related to your family’s insurance plan, please reach out to our agents at 727-345-0242 or contact Brian Ford, CPCU, CIC at bford@insuranceresourcesllc.com

Insurance Resources
5.0
Based on 69 reviews

Ron Weidner
13:13 23 Jun 20
I have been a client of Insurance Resources for over 15 years now and have always found them to be knowledgeable, quick... and efficient. During the time I've been with them I have always been very satisfied with the service they provide. I live in the UK and have been extremely impressed with the way they have managed to maintain their level of service to me during Covid-19, with telephones calls and e-mails still being answered and replied to as promptly as ever. In particular, Carol Cameron has been most helpful during the last few months, checking and chasing up on insurance policy renewals for me, and I can unhesitatingly recommend this company to anyone looking for a good insurance broker, especially to those who live outside the USA..read more

Agnes Lambing
19:46 14 Apr 20
I called Kris Morison for auto insurance and she did an excellent job. She found auto insurance for me and saved me... $200 over 6 months. Great agent, I recommend her for any of your insurance needs.read more

Tara Kott
23:27 20 Mar 20
Brian Ford with Insurance Resources is fantastic. He was recommended to me by my real estate agent. It was so helpful... speaking with him; he is exceedingly professional, knowledgeable, personable and ethical.read more
See All Reviews